AXIOMA METERING HAS ACHIEVED VICTORY AGAINST KAMSTRUP IN PATENT TRIAL 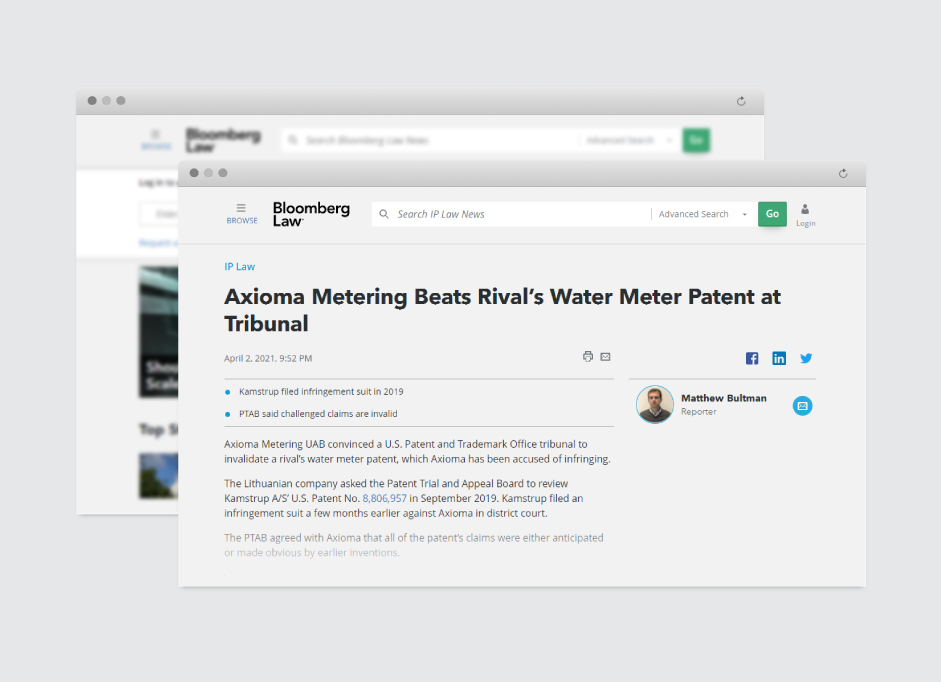 Axioma Metering has achieved indisputable victory against its competitor Kamstrup in patent trial in the US. Pivotal Patent Trial case in the United States has concluded very clear that Kamstrup’s patent is invalid.

The Patent Trial and Appeal Board has invalidated claims in a Kamstrup AS patent on an ultrasonic water meter that uses ultrasound to measure water consumption, finding in a final decision that Axioma Metering showed that the claims are both obvious and anticipated.

The decision rendered all 15 challenged claims in the Kamstrup company's patent invalid, nixing all of the asserted claims at issue in a parallel infringement suit in the District of Colorado. Kamstrup had sued Lithuanian company in June 2019 over its own Qualcosonic W1 ultrasonic water meter product, and the case was put on hold while the PTAB considered the patent's validity.

“It has been a lengthy and resource consuming process, but once it’s over, we are pleased that not only Axioma Metering has proved its rights, but by invalidating vague and groundless patent we opened the path for other technology companies to present their innovations to clients without artificial constraints. Let the best product win” says Ignas Vosylius, CEO of Axioma Metering.

Kamstrup’s patent (which is valid just in a few European countries) is basically based on the same claims as to the US patent version.

“US Patent Trial’s verdict leaves no doubt to us that parallel processes in a few other countries in Europe will be concluded soon, so it won’t affect our global strategy” says I. Vosylius.

Axioma Metering managed to win all major tenders in various countries where the company was competing against Kamstrup over the period since Qalcosonic W1 metering device was released in 2018. All wins are transparent as well as based on modern technologies, flexibility, and competitive prices.

“We have already proven that we would react to any kind of intimidation with a systemic and determined approach. Axioma Metering has achieved this goal in the US and it is just a matter of time to go through the same process in few European countries. If it comes to that, we will go all the way to defend our right to offer the best technology in the market” says I. Vosylius.