AXIOMA METERING TO SUPPLY WATER METERS TO OMAN, PLANS TO OPEN A FACTORY 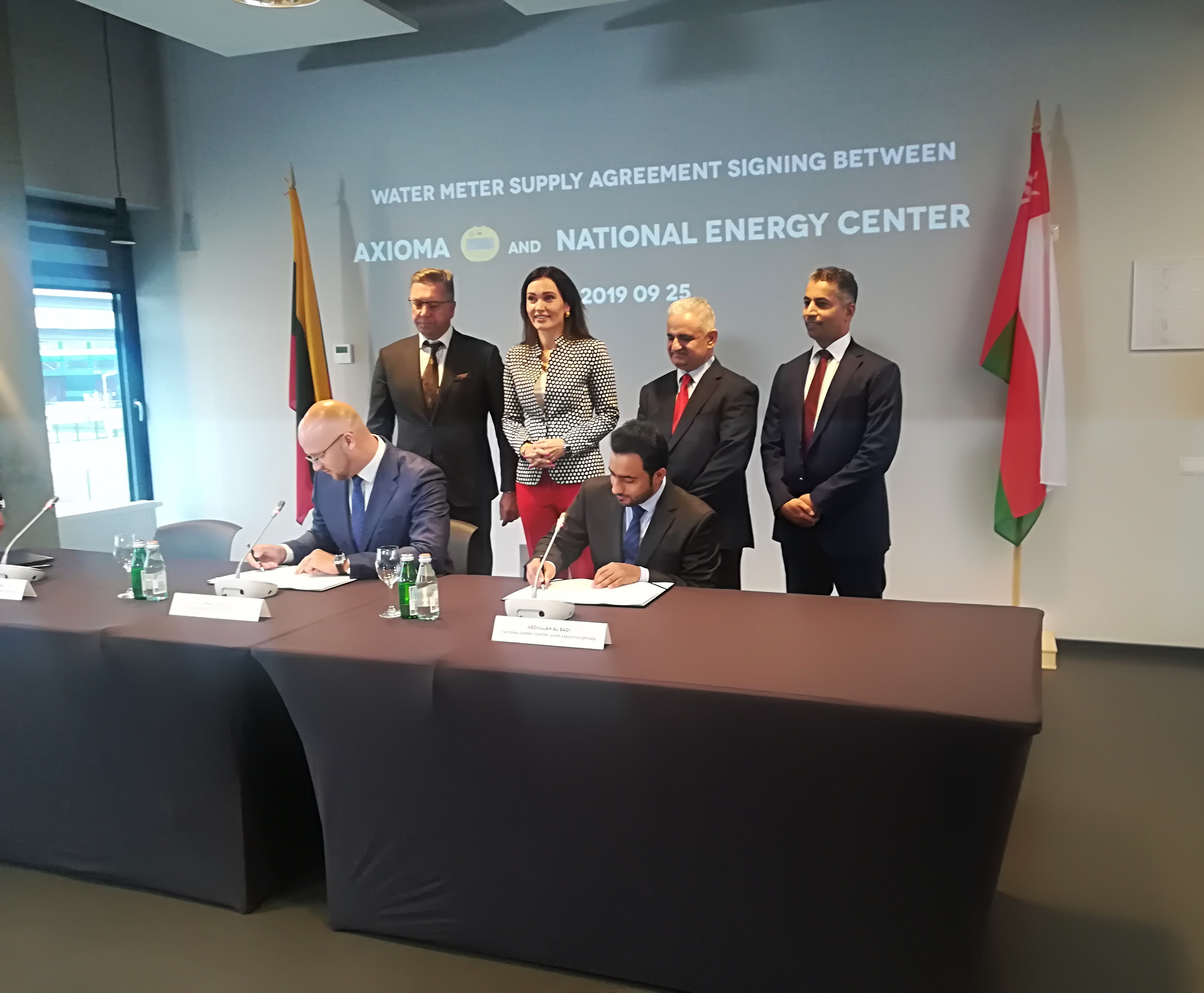 Axioma Metering, a developer of smart water and heat meters, will help Oman to technologically reform its national water metering by replacing the outdated technology with Internet of Things (IoT) solutions. In this project, the old meters in Oman will be replaced en masse with the Lithuanian smart water meters Qalcosonic W1.

Axioma Metering will not only supply the ultrasonic meters but also perform a feasibility study of building a factory and starting meter production in Oman. This is set forth in the Memorandum of Understanding that has been signed today by Axioma Metering and Oman’s delegation which arrived in Lithuania. The delegation comprises representatives of the semi-national company National Energy Center (NEC) of the Sultanate of Oman, who are looking for opportunities to bring the meter production to Oman.

The companies have also signed a meter supply contract for the first stage of Oman’s water metering reform. The entire project – the supply of metering devices and bringing of the meter production to Oman – will be implemented in several stages over 5 years. The value of the project exceeds 10 million euros, and the deal will increase the trade volume between Lithuania and Oman by five times.

Half of the project, worth around 5 million euros, will be implemented in the first 12 months. It has been agreed that 100,000 smart Lithuanian-made meters will reach Oman within 10 months.

“We are proud of being able to contribute to such an innovative international project and an important change that will make it possible to save more drinkable water in Oman. Our client evaluated the latest metering devices available on the market and negotiated with many producers. The fact that they chose our smart device is a very important recognition, it confirms to us that we are on the right path to further success with our meter,” Axioma Metering’s CEO Ignas Vosylius has said.

“We are pleased to announce that we have chosen Axioma Metering meters for our national water metering transformation project which will employ the IoT technology. We believe that this is the beginning of a long-term business partnership with this company,” NEC General Manager Abdullah Albadi has said.

According to Andrius Janukonis, Chairman of the Board at ICOR, the owner of Axioma Metering, the delegation of the new partners of the company that has recently arrived in Lithuania represent not only Oman, but also its neighbours that belong to the Gulf Cooperation Council – United Arab Emirates, Saudi Arabia, Bahrain and Qatar – that are also starting water sector reforms.

“We hope that the successful start in Oman will open up the large market of the Persian Gulf region. We are also glad to have an opportunity to significantly contribute to strengthening the mutual relations between Lithuania and Oman,” says Andrius Janukonis, Chairman of the Board at ICOR, the owner of Axioma Metering.

The NEC company installs the Internet of Things technologies in various projects, one of which is the water metering reform. It will employ a smart data collection system based on the LoRa technology. Upon completing the reform, Oman will become the world leader in terms of the density of the LoRa technology usage. At the same time, Axioma Metering will become the largest producer in terms of the number of meters using this technology.

LoRa is a low energy consuming, wide area network (LPWAN) protocol for connecting a wireless internet of battery-powered things to regional, national or worldwide networks. The main advantage of this technology is data transfer over large distances without the need for any complex solutions.

Axioma Metering’s new device Qalcosonic W1 is one of the most universal energy meters on the market. The data from this device can be read by LoRa and WMBUS radio protocol.

The meters are long-lasting, using ultrasonic technology for water metering, which guarantees 100% accuracy and preventively reacts to system failures.

The Axioma Metering team produced the ultrasonic meter Qalcosonic W1 in 2018 after three years of development. The meter is currently being tested by more than 30 utility companies in Germany, France, the United Kingdom, Denmark, Norway, Australia, Argentina, Mexico and other countries.

The modern meters are produced in a new factory which was opened this year and required 15 million euros of investment. Axioma Metering is planning to produce and sell a total of almost 200,000 meters in 2019 and around 800,000 in 2020, expanding their sales to North America, Asia, Middle East and Africa.